Today I will be quickly covering two of the games I have knocked off of my unplayed games list. I played a few others, but for ease I will be putting them in smaller groups. For those of you just tuning in you can refer to my last post titled Unplayed Games. I must also note that despite my urgency in playing all of these games before purchasing more… I may have slipped up. I encountered several games at a neat little store called Bargain Hunt. I got a load of games for a total of like $40. Feel free to judge me now.

This game consists of six different characters that all have their own decks and you have a real-time “Brawl”. I’ll include the rules and a video for ease. Each deck has multiple card types ranging from attacks to blocks and even cards that clear the board so to speak. It’s a really fast paced and simple game. I have only played a two player game so the game may very well get more complicated with additional players. The art reminds me a great deal of Street Fighter and it was really cool playing a fighting game with cards. There have been three expansions, but I’ve looked and they are hard to find at a reasonable price, they are Brawl: Catfight, Brawl: Club Foglio, and Brawl: Ting Ting. There was also a recent Kickstarter for Brawl: Senior Year. The general Brawl page on Cheapass has information regarding all Brawl games and characters and even cool coloring pages for Brawl: Senior Year character. All and all I think it’s a great little game with the potential for growth. Different characters definitely make the replayability great.

Get Lucky by Cheapass Games.

This is the card game version of Kill Doctor Lucky, which is a huge hit with my gaming groups. Each players gets to be a character that has been scorned by Doctor Lucky for some reason or another and it is hilarious. I’ll include rules and a video for ease. The art work is phenomenal and the writing is even better. Spite cards are what you use to stop other players from winning. The spite cards and character cards both have funny bits of writing on them that really make the game giggle worthy despite the fact that your entire purpose is to kill Doctor Lucky. I really preferred the card game to the board game, but literally everyone else I played with felt the board game was better. The board game definitely has a charming feel, but the card game takes up less space. The both have different rules and still feel very similar. This is a great game with great replayability and will be a part of our collection for years to come.

Both of these games were from Cheapass games, so I thought I’d mention that they have this great Free Games sections that you should check out. Also feel free to look at their contact page to subscribe to their newsletter, Facebook, Twitter, and Instagram.

If you liked this review and want to be kept up to date please follow my page and like me on Facebook. Until next time… Live by the Board.

So my we started going through our game collection and realized that we have roughly 39 unplayed games in our collections. This includes board games and card games. We have decided we won’t buy anymore games until we’ve played all of our collection. I’ll do my first unplayed game post tomorrow and update the number as I go along.

Also I got several more requests to post after I play games, so that will start tomorrow as well. Thank you guys for contacting me. If you liked this review and want to be kept up to date please follow my page and like me on Facebook. Until next time… Live by the Board.

Sorry this is about a week late. The lot of us (6) got sick this past week, not to mention my infant is teething so we are all collectively exhausted. I have posts about Concept and Codenames coming up, but for today I will be discussing some games I played on Valentine’s Day. For Valentine’s Day my husband got me Forbidden Desert, two light novels and a manga of The Devil is a Part-Timer (great story, you should check it out.). 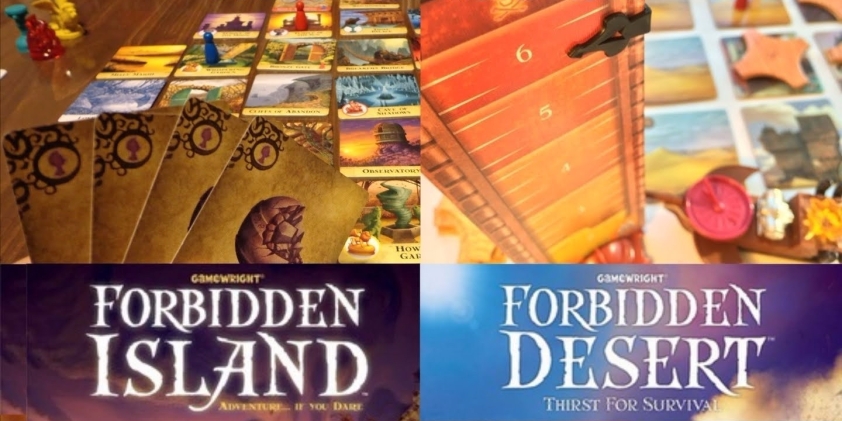 Ok so starting with the new game. Forbidden Desert(FD) is the sequel to Forbidden Island(FI), which is a great game and very easy to learn. Forbidden Desert, however, is a tad bit more complex. Both games are co-op and have simple set up. We have had FI for quite some time and after a few plays we could play in a very automated fashion. I’ll attach rules and a video regarding FI. FD we’ve only played twice, but I really feel that it’s going to have much higher replayability than FI. The games are very similar in mechanics, but the sequel offers several additional rules which makes it have a higher level of skill. I’ll also include rules and a video for FD. There are directional cards for the storm in FD and those are we bit confusing at times, but other than that it’s pretty simple. I had a great time playing with my husband and I think it was a great choice, but it’s honestly better with more players. I prefer FD of the two because it adds an additional player. We have six in our family, but only five us old enough to play. Us five never got to play FI together so it’s really cool knowing that sometime this week I can play with my older kids. I really suggest giving both of these a try.

This is a game that we’ve had for a while. It’s similar to chess and I’ve heard people say that it’s similar to Hive. I honestly did not think I’d like it, but the variety makes it hard not to at least be interested in it. I’m not great at abstract strategy games and I do not much care for chess. The tiles you lay have two sides because you flip them after you move them. Each side is different and there are many different tile abilities and movements. It feels overwhelmingly complicated at first, but you quickly get used to it. I will include rules and a video. I’ve never played with anyone but my husband and I truly believe I wouldn’t enjoy it with anyone else. My husband makes the game fun for me and encourages me to calm down and not get frustrated at the fact that I’m not great at it. I believe I’ve won once and we’ve played ALOT. He played with our daughter today and of course she win her first game. Ugh. Even if this doesn’t sound great to you… still give it a shot, you just need to find a good player 2. Catalyst has tons of printables on their site for The Duke, including a print and play! 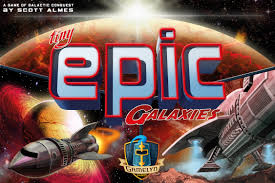 TEG is an adorable game with great components and fairly simple rules. I’ve played several games now with 2, 3 and 5 players and it definitely gets more fun and more complicated with more players. This is a competitive game that involves conquering planets, upgrading your galaxy, and generally hoping your opponents don’t realize how easy it’d be for them crush your hopes and dreams. I’ll add rules and a video. I know I already mentioned it, but the components really are great the art is beautiful and the cards and pieces are made well, not to mention the inside of the box is part of the game! One lid is a dice tray with amazing art and the other is a handy little guide for the different planets in the game. This is a wonderful game and there is a whole series of Tiny Epic Games that you should check out. I’ve only played two so far, but I am honestly looking forward to playing the rest of the library. 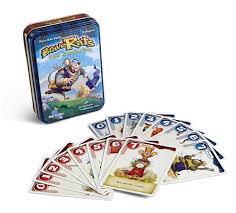 I do believe I have talked bout BraveRats on here before, but just in case here we go. BraveRats is a war like game for two players that plays really quickly. It’s a remake of the game R. It reminds me of a 2 player Love Letter. It’s easy to grasp because the rules are written on the card and any confusion you might have is summed up by this tiny little que card that comes with the game. I’ll include rules and a video. The cards are nice, the insert is lovely, as is the tin. This a favorite for passing time and you can play almost anywhere.

Thank you for reading. Real quick question for everyone, one subscriber contacted me and asked if I’d post a short message any time I played a game. If that’s something you’d be interested in please contact me and let me know. If you liked this review and want to be kept up to date please follow my page and like me on Facebook. Until next time… Live by the Board.