Pardon my absence, life intervened, the weather sucks, et cetera…ON TO THE GAMES!!!
I’ve decided to highlight a couple of new EXCELLENT strictly 2 player games that have recently come to my table.  Lemme preface this by saying, there is something inherently tense about a 2 player experience in games that is quite the rush.  There’s two different kinds of “experienced” players in these scenarios:
1) A player that is well acquainted with this particular game, or games in general.
2) A player that is well acquainted with YOU.
When you’re playing with #2 (Haha! Poop joke!) this tension is so thick, it’s damn near physically tangible (Not unlike a really raunchy stink cloud! Second poop joke! I’m on a roll!)  It’s a great rhythm you get into, like a mental tug-of-war.  Though, #1 makes it to the table more often, #2 will make for a vastly more engaging experience.  I use these examples because they apply very differently to both of the games I’m highlighting.  For example, the game that meshes best with #1 is: 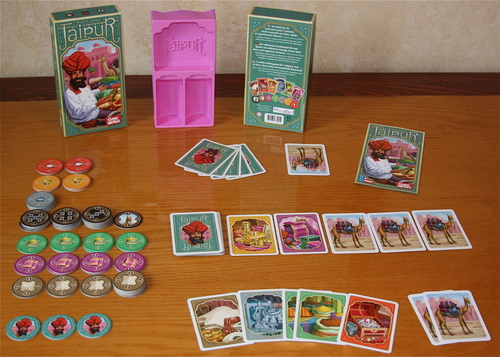 Jaipur
2 players
30 minutes
Asmodee
In Jaipur, you’re hoping to become the Maharaja’s personal trader by gaining wealth, blah blah.  The theme is light, like…REALLY LIGHT.  But that’s not a big problem, in fact, it’s great.  Jaipur is a set collecting and economic trading game.  Having to build an Indian theme around a solid trading mechanic could have been difficult…unless you (mostly) aschew it.  What you are left with is an incredibly solid, tense, mechanically sound game.  It sways slightly more to the “skill” end of the “Luck/Skill” spectrum, but this isn’t a problem either.
The game plays over the course of 2-3 rounds, in which the players collect different cards from the “market” in the center of the table, and cash them in for differently valued chips.  The more of one type of card you cash in, more chips (and bonus chips) you get.  However, waiting for more cards is not without risk.  You see, the first chips of every good are worth more than the subsequent chips, so sometimes it pays to cash in goods early and ignore bonuses.  This makes for a very tense, and tactical game.
What makes this game better for #1 is that it exists primarily for its mechanics.  It would be all too easy for an experienced gamer to pick up after 2, maybe 3 turns.  It’s nothing new, but it’s mechanics are streamlined and just deep enough to really work.  I HIGHLY RECOMMEND this one.
What game could be more ideal for #2, you ask?  Well, aren’t you impatient valued reader! Anyway, on to the next game… 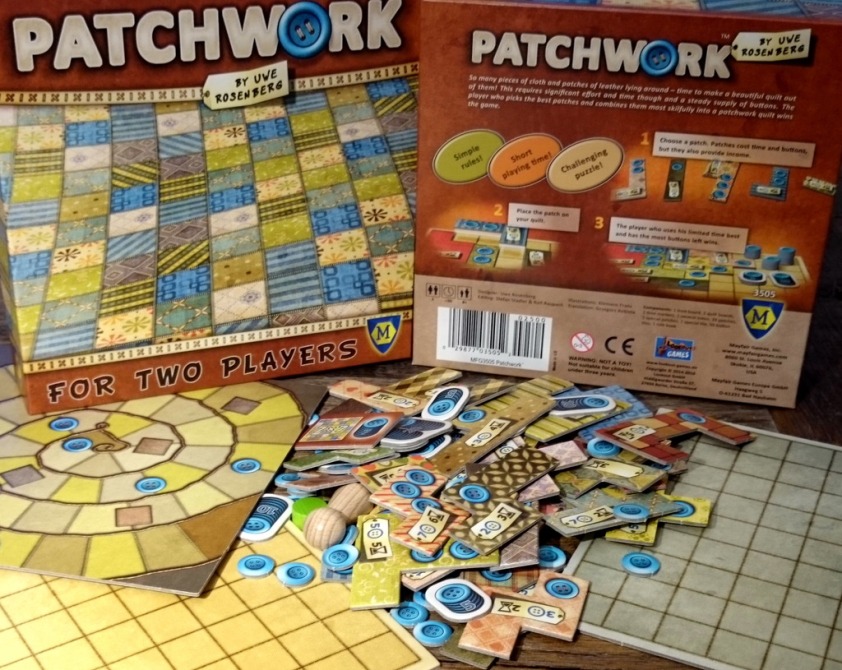 Patchwork
2 players
30 minutes
Mayfair
The theme here is simple, you’re attempting to build a quilt out of fabric patches displayed in the middle of the table.  For all of this simplicity, it’s a strong, well implemented theme.  This game is remarkably easy to learn to teach, and has a fantastic ebb and flow to it.  The game has three simple mechanics: First, there’s an economic mechanic used for purchasing swatches of fabric.  Second, upon purchasing said fabric, you must place it on your personal 9×9  grid.  It’s almost like a table top Tetris game.  Third, you have an inconsistent turn order.  This element adds a REMARKABLE layer of strategy.
See, when you purchase pieces of fabric, they cost both currency (buttons…get it?!) and spaces moved on the central player board.  And whomever’s player marker is in second place, is the first player to move.  This can potentially result in multiple turns before one player relinquishes control to the other player.  And conversely, currency is gained (in part) by advancing over button spaces on the central player board. So relinquishing control for multiple turns isn’t always the worst option.  It’s a game with a surprising amount of depth, and decent player interaction (for controlling turn order and available fabric swatches for the next player).
When playing this with someone you really know, you can see several different sets of cogs turning in their head in tandem.  You can see the fiscal machinations grind up against the cogs of quilt symmetry, all whilst banging into the clockwork of proper turn and board control.  Cannot recommend this game more!
Loyal readers, I am head over heels for both of these games…but I cannot get enough of Patchwork.  Perhaps it’s because I have roughly a 12-1 record with the game, perhaps it’s because I enjoy the Tetris like puzzle of the personal game board…or maybe it’s because my Wife loves playing it with me, because she’s a fantastic #2.  For the record, yes, that was a poop pun.  No, I have no shame.
Thanks for reading.
-The Husband