I am so freaking excited!! We got our pre-ordered copy of the Castle Panic expansion: The Dark Titan last week! Our pre-order came with a promo card. No joke, in a three-day span, we played 13 rounds!!! 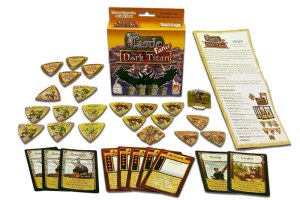 There are many great monsters and card editions this time. There a now Elite Monsters that you have roll for damage (D6 – Roll 3 or higher), so there is not guarantee you’ll hit it which sucks because either way you have to get rid of the card you used.  The most awesome out of them being Agranok. Agranok isn’t picked out of the draw pile like normal monsters, he has Heralds that are placed in his card as they are drawn, once you pull three of the six he is summoned. Drawing the Heralds to summon him sounds harmless enough until you read his card. When drawing the first Herald, each player must discard one hit card, when drawing the second, each player discards a special card (noted by the purple dots), and when drawing the third you roll for a giant bolder and Agranok has been summoned. Agranok happens to be the toughest monster in the Castle Panic series. He is literally placed in the game to draw all of your fire power. He has eight hit points and the last two MUST be taken simultaneously. When using a slay card against him it only counts as four hits points and is immediately banished from the game. He has five cards (six including the promo) that all contain new and different abilities that make you wish you never crossed his path. He isn’t damaged by structures, so he could literally demolish your whole Kingdom without breaking a sweat. Here’s the thing though… as painful as some on his abilities might be, for example: Banishing the top card in the deck (meaning it’s gone for the rest of the game) or moving two additional spaces… Agranok isn’t actually that formidable. The fact that you have to focus all of your energy on him is what makes him scary, because while your focus is on him all of the other monsters on the board are making their way to your castle unharmed.

Now I know what you’re thinking… “Why would I play something I am destined to lose?”. I promise it’s not all that bad, especially because the wonderful folks over at Fireside Games have seen it fit to give us comrade tokens. There are three tokens we can randomly draw like you do monster tokens. One of them has three points and if it makes it to the castle ring what ever health/hit points it have left is used to damage monsters on the board. The second one has two points and if it makes it to the castle ring, each player gets to draw as many cards as points are left. The third one is also a two-pointer, if it makes it to the castle ring we get to build one or two walls depending on the need and points left. The guys do not move the same way monsters move, they move by players discarding cards. Unfortunately monsters can damage our comrades and kill them, however, our comrades do the same to them. Another awesome comrade comes in the form of a card, The Cavalier card is a standing token we can move around the board to damage people, he has been our saving grace more than once.

The cool thing about this expansion is that you can play it with just Castle Panic or you can add The Wizard’s Tower as well. When playing with The Wizard’s Tower instead of using the usual random three Mega Boss Monsters, you onlu use two. When it comes to the many cards of Agranok you can choose which one to use or you can pick at random.

We played six rounds of The Dark Titan with just Castle Panic, one round for each level of Agranok. Then we played six more rounds of The Dark Titan with The Wizard’s Tower, one with each level of Agranok. Each of these twelve rounds took roughly 45 minutes. When you play Castle Panic with any expansion, you are always instructed to take out certain tokens so that the game isn’t horribly overwhelming. Which brings me to round thirteen. My husband and I figured we hadn’t taken enough of a beating from Agranok so we played with every single token from every single game. It took us 90 minutes and in the end we survived with all towers and walls. Now some of you may remember my Steps to Awesomeness piece I put in my Castle Panic! post. I gave you numbers of tokens for each way we played Castle Panic to put things in perspective. I am still going to do that, just not in this post. I will be writing another post in the next couple of weeks regarding a challenge we have agreed to take on. We will be playing with every token in all of the games AND placing them back in the draw pile until we have killed every level of Agranok, that means will be killing Agranok starting at level one and putting his Heralds back in the draw pile until level six has been summoned. 🙂

In the meantime, please go support Fireside Games by going their website to purchase your Castle Panic products, they come with promos!!! 🙂 Until next time… wish us luck and Live by the Board!