Last night was my first time trying Munchkin Panic. I found it to be entertaining, however, in the end I was mildly disappointed.

For those of you familiar with Munchkin, you know that the game consists of bargaining to get ahead as much as possible and inevitably stabbing your friends in the back. If you’ve ever heard the phrase “Monopoly ruins families”, you’ve obviously never played Munchkin. Munchkin will send you on a war path and keep you absolutely determined to make whomever won regret it.

I’m sure everyone has heard me talk about Castle Panic enough to realize that it is a very cooperative game and usually brings the table together. 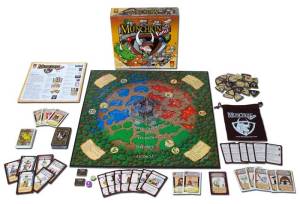 Munchkin Panic on the other hand combines these two to create a confusing ballet of backstabbing and bartering because you need each other to keep the castle walls up. Basically you barter with each other for kill points and treasure cards. The thing is that in the end whomever has the most kill points has won the game.

This game is honestly very fun, I had a good time even though I was beyond heartbroken that I lost at my first game. It got the point where I was so concerned about points that I ended up not bargaining any longer because my husband was getting all of the kill points. We actually discarded monsters just so the other person wouldn’t get the kill points. We were being incredibly spiteful the whole game and yet in the end I still had the thought of “at least we only lost one wall”.

Every time a monster is defeated there are treasures, which is where the bartering to defeat them comes from. Although you may not get the kill if you help someone, you could potentially get a fantastic treasure that helps you get ahead in the end. Don’t be shy to offer help, sometimes it’s worth it.

My final opinion on this game is that it’s really good. I know my husband probably thought I hated the game the whole time, but it wasn’t true. I had such high hopes in it being just a goofy version of Castle Panic, that my first thought was how it doesn’t compare with Castle Panic. I was defeated, but I will return just as spiteful as I left. Go ahead and take a look at this wonderful game and be prepared to be a little sore at the other players for a while.

Miniature Market has the game available for a good price. Take a look at The Fireside Website and Steve Jackson’s World of Munchkin Site for more information. If you liked this review and want to be kept up to date please follow my page and like me on Facebook. Until next time… Live by the Board.