So I decided I would try a solo game of Castle Panic for those of you that can’t convince your family and friends to play a board game with you (I have the same issue). I am very fortunate to have a husband who loves board games.
For those of you that read my older post regarding Castle Panic, you should know this is one of my favorites. My husband and I have become so automated at the game that we play with every single piece. If you haven’t read the older post I suggest you do to get a better understanding of the game. 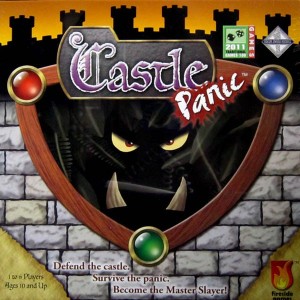 -Castle Panic: 49 Monster Tokens (set up from the rule book)-

I literally played with the bare rules, no extra pieces no promos… just the standard rules.
Anyhow the rules differ a bit more than a multi-player game, particularly because there is no one to trade with.

Within my first three rotations I had already lost three of the six towers and two of the six walls. Considering the fact that if you lose all your towers you lose the game, it was not a good start. I was very convinced that I was going to lose.

The mechanics that go into a multiplayer game are far superior to that of a solo campaign. I still had fun, but the whole time I was mourning the absence of my partner, after all who wants to go on a monster murdering spree alone? 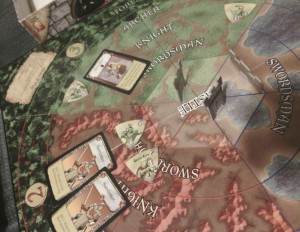 I was scared as heck, BUT I got very lucky and drew two Red Swordsman cards and one Barbarian. (Barbarian is an instant kill) I took out the 3HP Troll with the Barbarian and the two monsters in Red with my two Red Swordsman. I also had a card called Drive Back, which drives one monster back to the forest! My next turn I got a Green Archer and was able to take out the last monster!!! I survived my first campaign with two towers and one wall. Ok so it wasn’t a great ending, but it was definitely a relieving one. It took me only twenty minutes to go through this solo campaign.

My opinion…? Do not play a solo mission if you have never played the game before. Having knowledge of the cards that could possibly show up really helps the strategy. At one point I had a card that I knew I could discard because I had yet to draw a card that could help me and there were only three cards left… I had good odds and luckily guessed right. I suggest giving this a try when you’re bored. It really was fun, regardless of how many times I had to wipe the sweat from my brow!

For more information about Castle Panic including Promotional items and expansions, I suggest checking out the Fireside website. That site also has a lot of reviews, including one from Tabletop w/ Wil Wheaton! Also check out Miniature Market for the best pricing. I’ll be back tomorrow with Day 2! Thank you for reading and until next time… Live by the Board.